Hedger Corp: What Happened With Derek

The saga of Hedger Corp continues. Catch up here.

It’s time to check in on our friend Derek.

As you may recall, Derek was ordered to complete a week of therapy after he wrapped a bunch of colleagues up in duct tape.

A soon as Derek arrived at the therapist’s office, he could tell things were a bit off. Instead of saying, “Hello,” the therapist struck a pose and asked, “Would you rather I do THIS pose…” 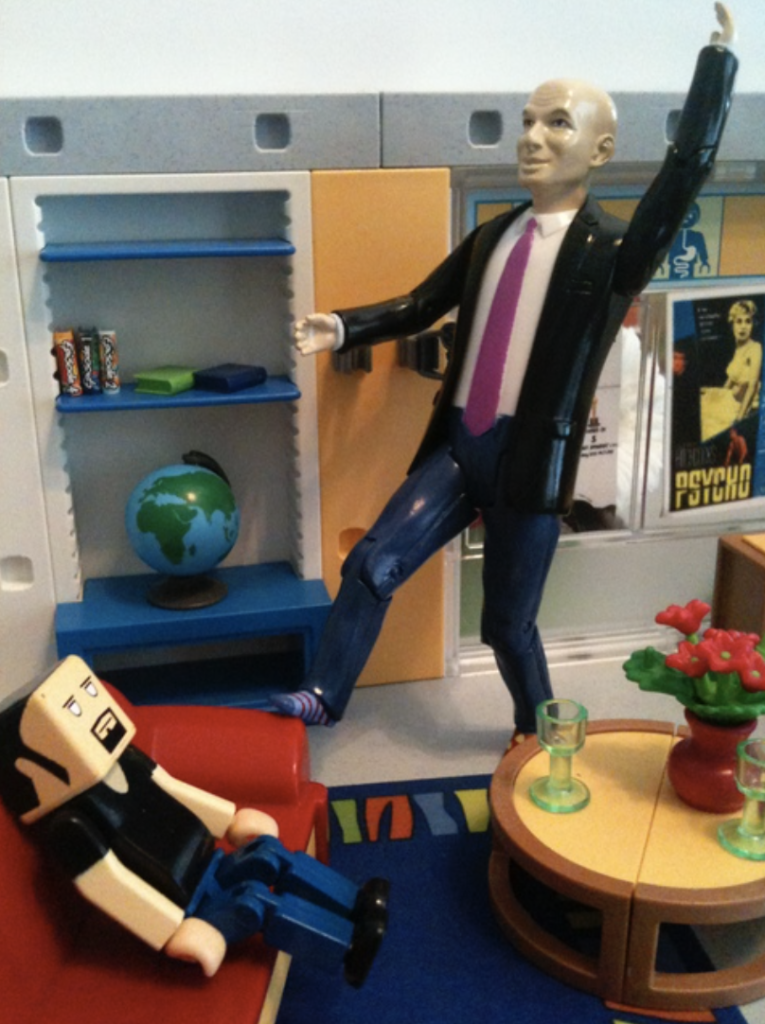 He repositioned himself, then finished the sentence: “Or THIS pose?” 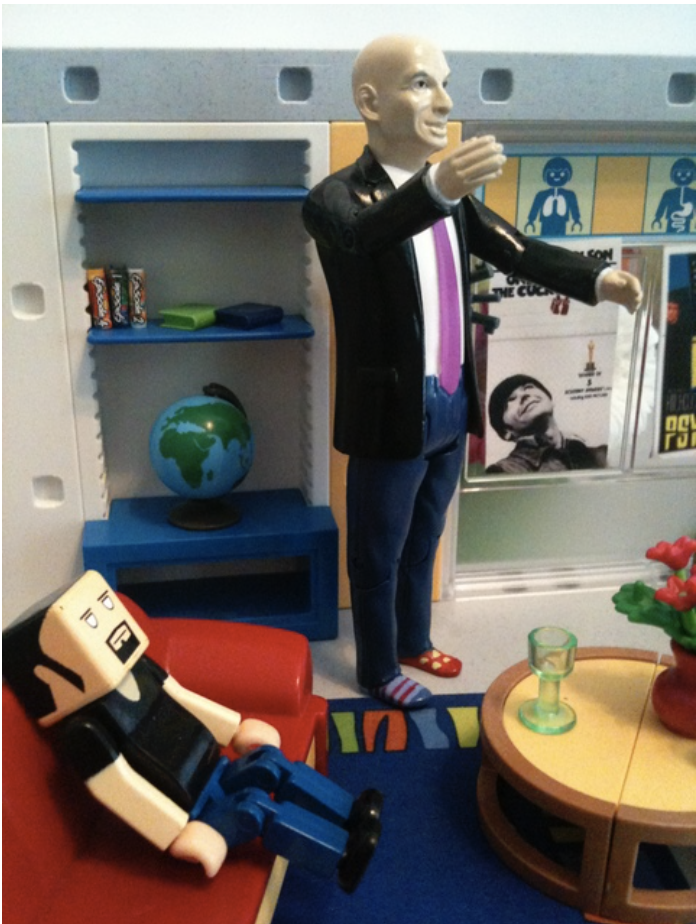 Derek had no preference, and didn’t know what to say.

The therapist moved on to another question: “Would you rather purchase THIS sock?” 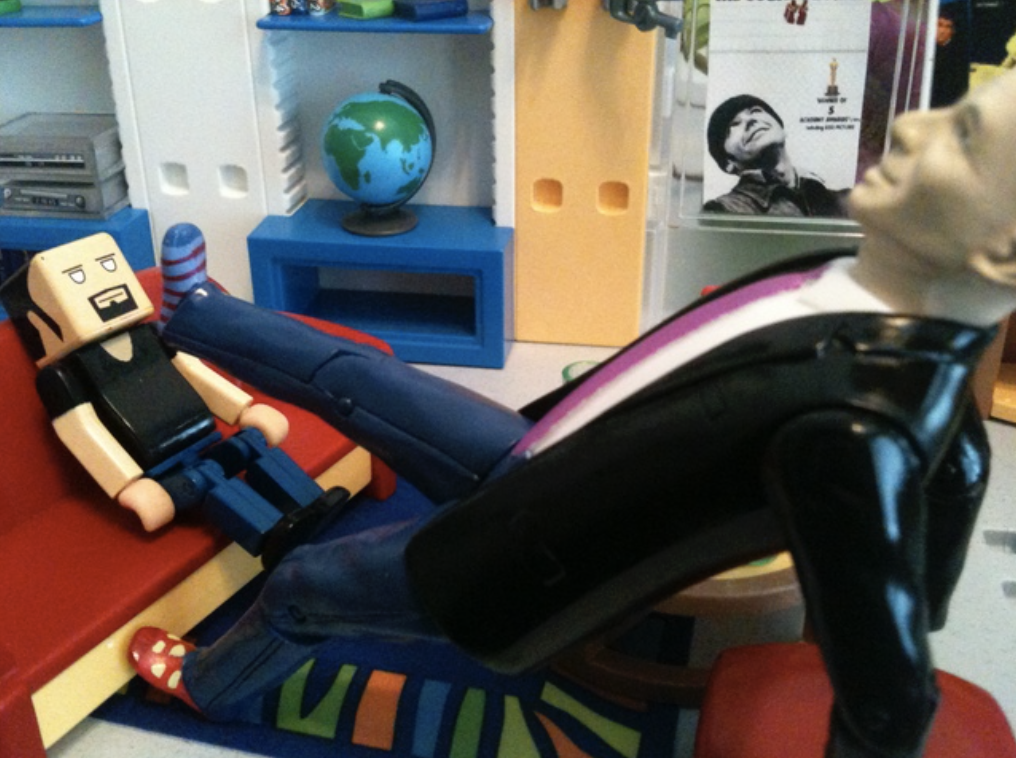 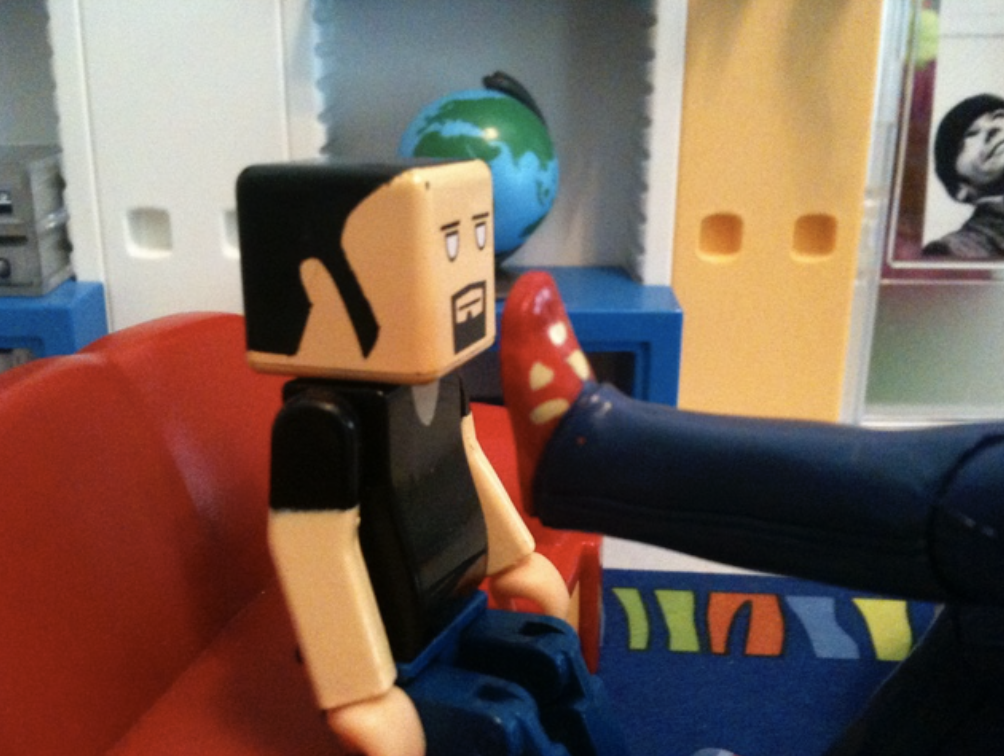 Derek hesitated. Both socks were too wild for his taste.

The therapist didn’t wait for an answer. Instead he dashed out of the room, then returned pushing an enormous book. As he situated the book he asked, “Would you rather review the material in this book…?” 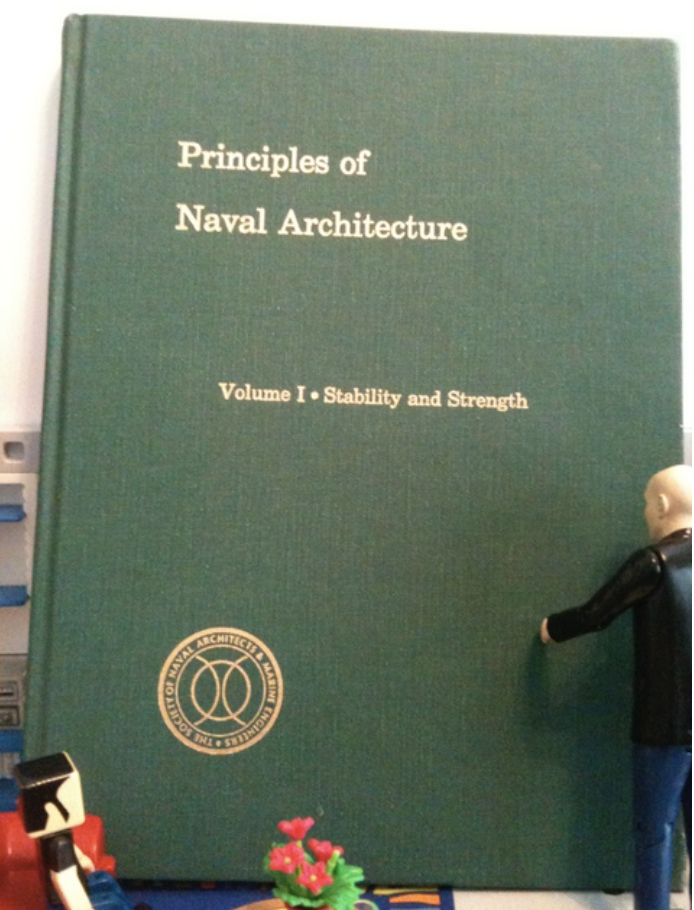 Then he shoved that book to the side and brought in another. 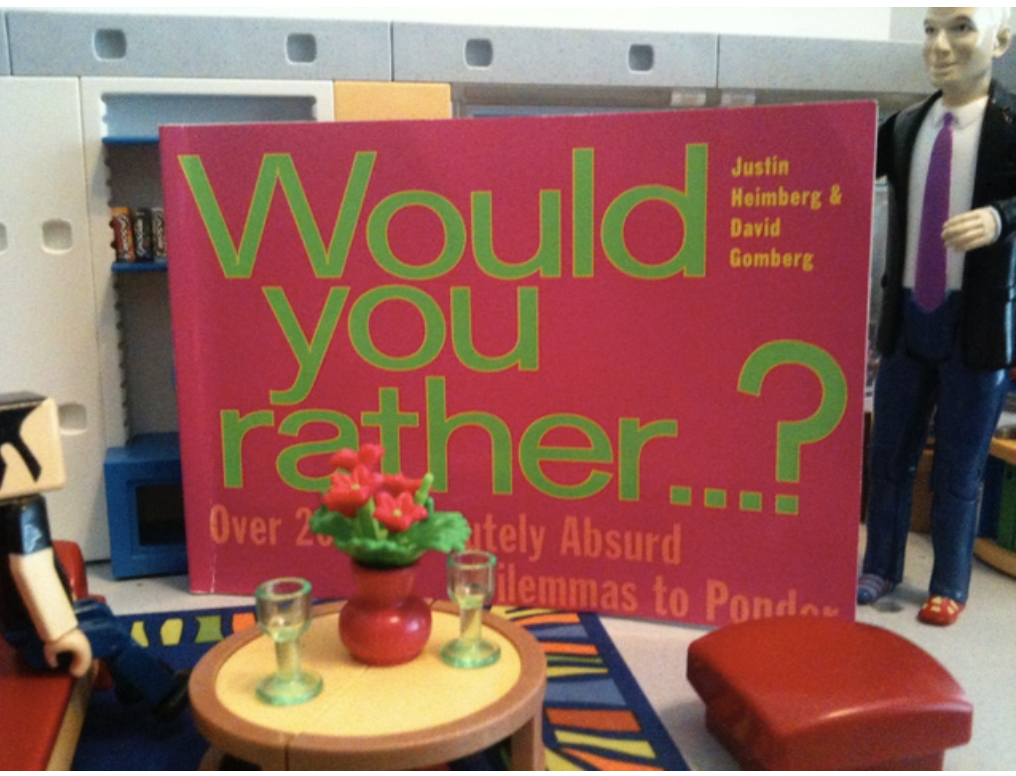 Derek’s heart sank. He preferred the “Would You Rather” book over “Principles of Naval Architecture, Volume 1: Stability and Strength.” But the therapist already seemed insanely fixated on “Would You Rather” questions. Derek had a feeling the book was only going to exacerbate the situation.

And he was right.

The therapist opened the Would You Rather book to page two and read aloud:

“Derek!” he yelled. “Would you rather have living eyebrows that crawl about your face

leave a trail of paprika wherever you go?”

Then he produced a cue card to remind Derek of the question. 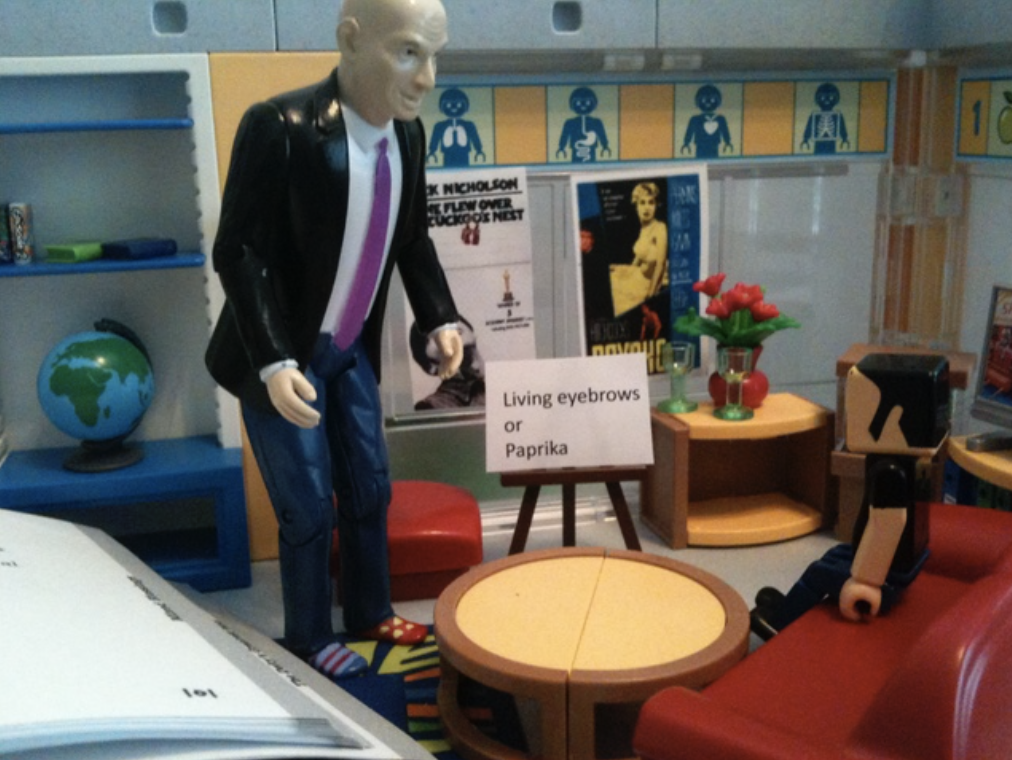 Living eyebrows? Paprika trail? What kind of therapy was this? Derek shut his eyes and prayed that when he opened them all this would be gone.

But the therapist would have none of it.  “Derek!” he yelled again. “Listen carefully! This next one is complicated.”

have a firm grasp of Roman numerals but look exactly like Weird Al Yankovic?” 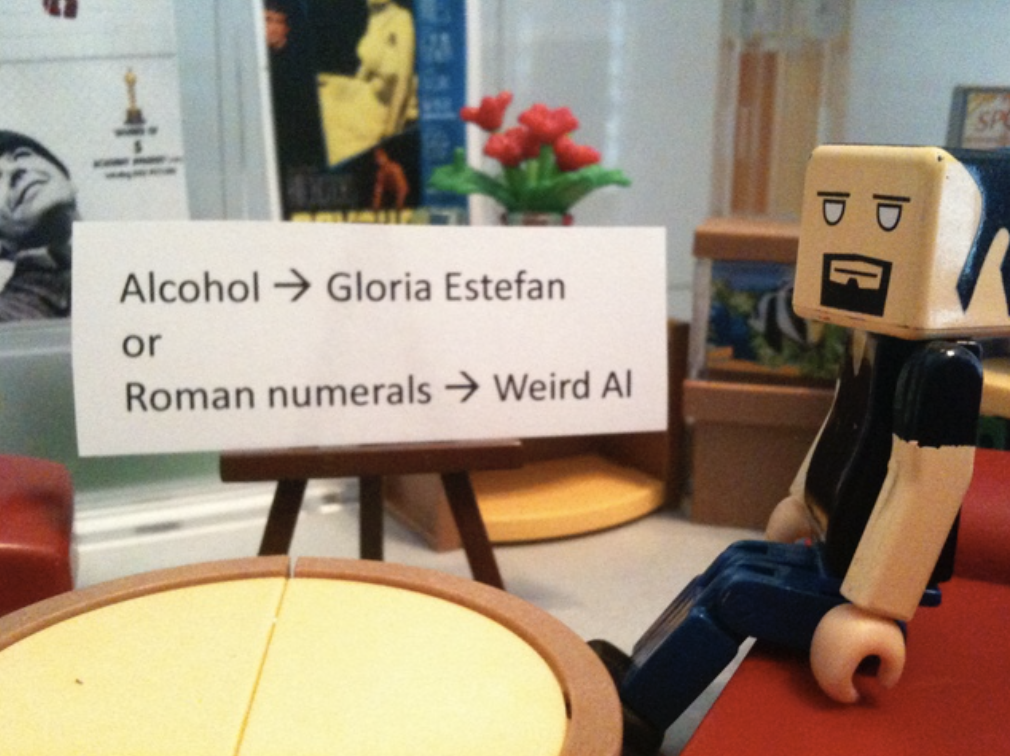 That was a lot of information to take in. Derek found himself becoming distracted by the thought of Gloria Estefan’s song Conga. “Come on, shake your body baby, do the Conga,” he sang softly to himself.

Derek was irritated. Since when did he actually have to answer these ridiculous questions?

He needed a way out, so he asked to go to the bathroom. His request was granted.

Finally, he found some peace and quiet! But as he sat there, he began to think about the Would You Rather questions… 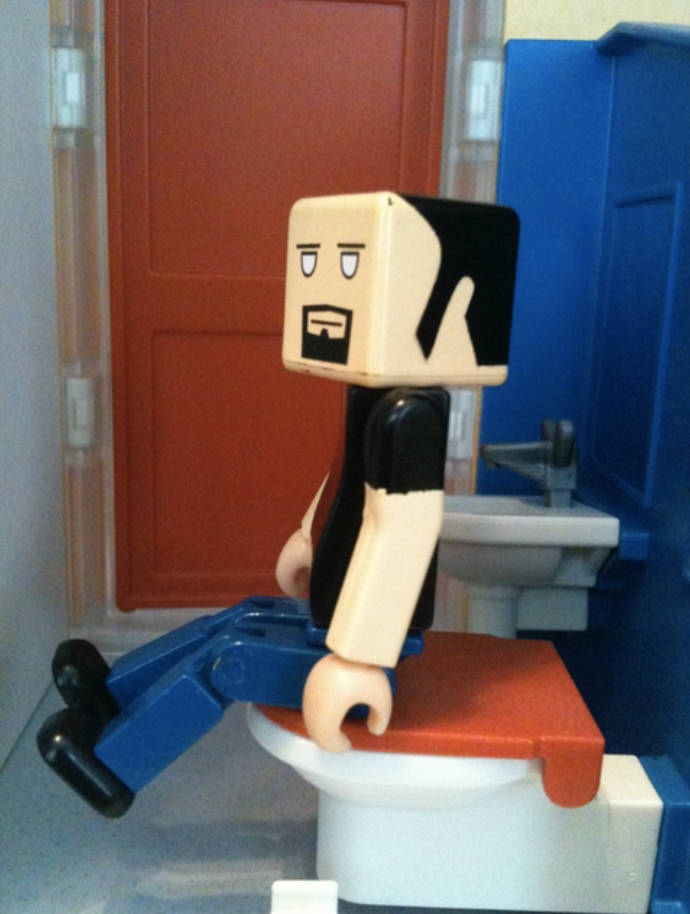 Would it be possible to drink enough alcohol to become intelligent without becoming Gloria? Where was that balance? How many drinks would that be?

Suddenly the bathroom door flew open. “Do you need assistance?” the therapist asked. 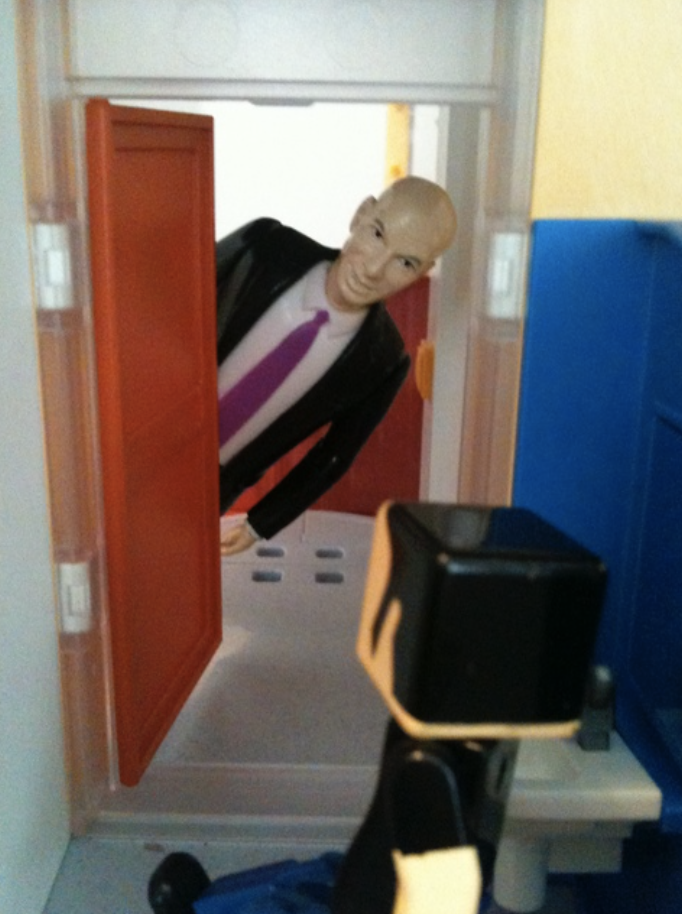 It was clear that bathroom time was over. The two headed back up to the office, where the therapist had another question ready.

“Derek, would you rather gyrate spastically in front of your best friend’s parents for a full two minutes

wear a very revealing thong bathing suit to the beach?” 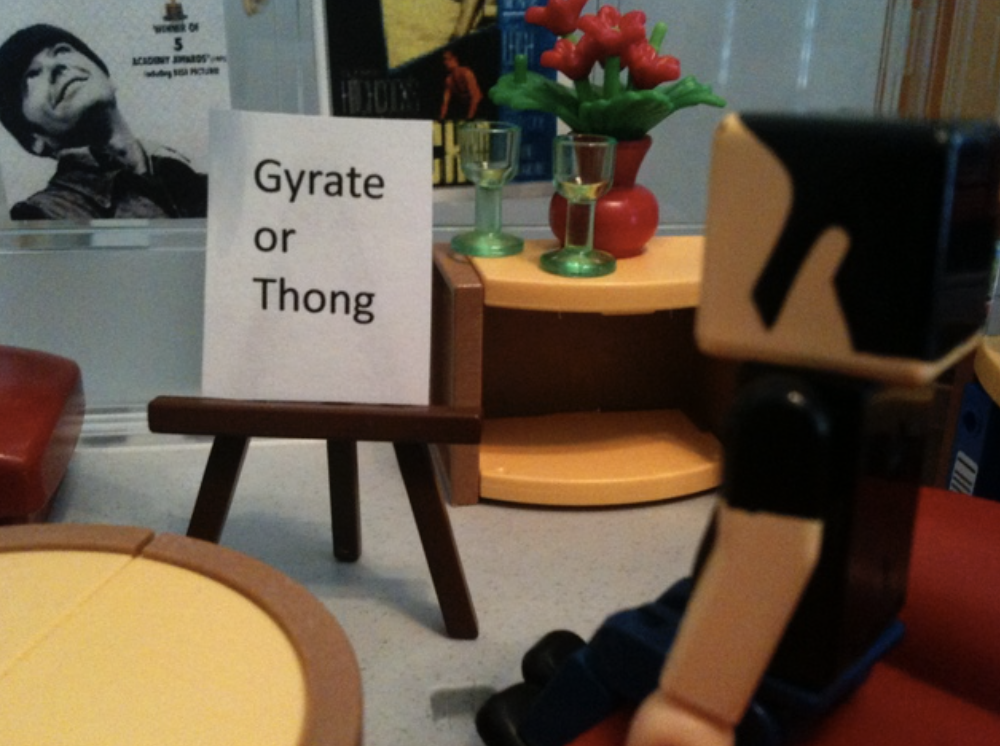 As Derek considered this, the therapist leaned forward with some insight.

“I’ve done both,” he said gravely. “And neither ended well.” 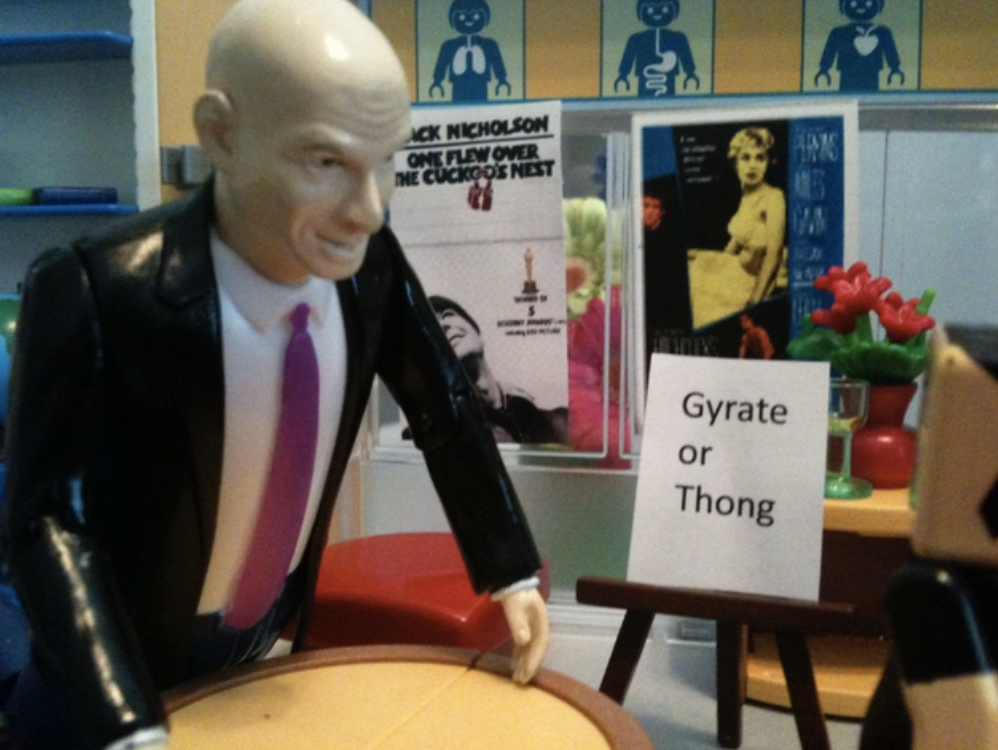 “Now a question from page 12!” the therapist yelled.

“Would you rather always introduce yourself and others in the style of a professional wrestling announcer. ‘From parts unknown, weighing in at 155 pounds…!’

have your legal name changed to Pumpy?” 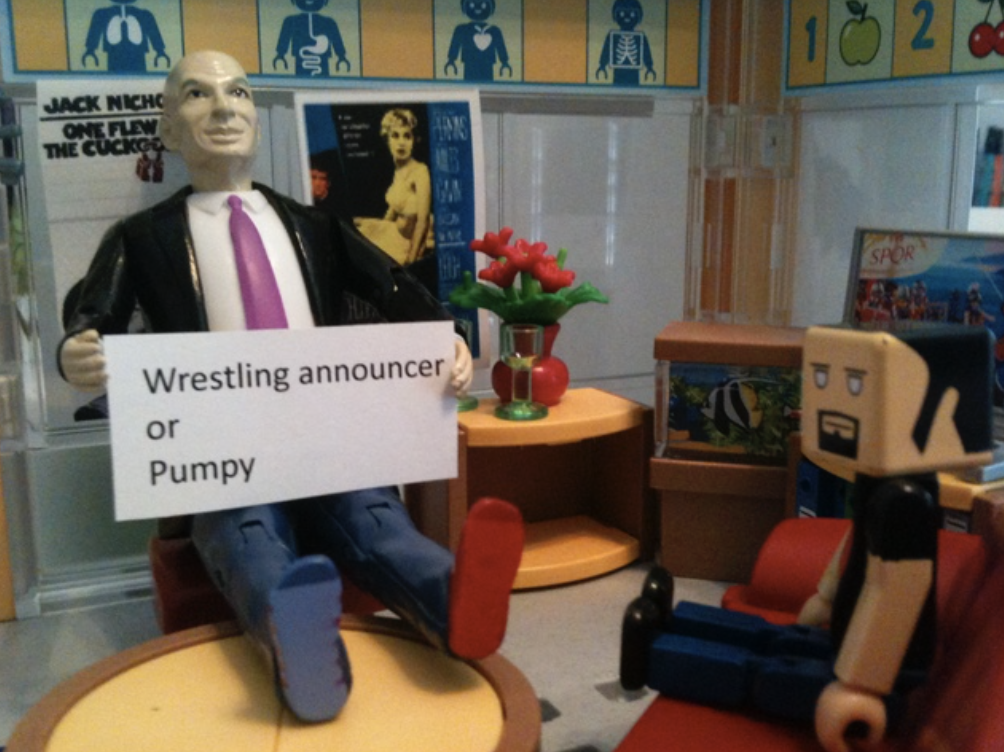 As this burning question lingered in the air, another man suddenly entered the room.

The therapist stood up. “Dr. Neal!” he exclaimed. 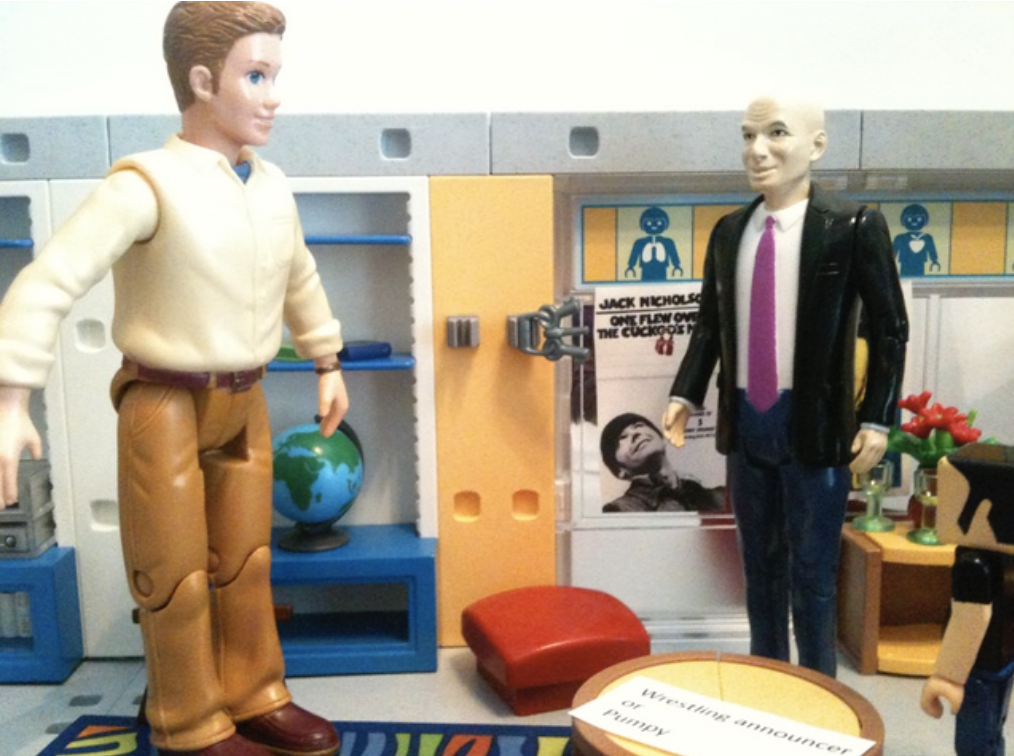 The tall man slapped the therapist on the back. “Hello!” he said. “I’m sorry I’m so late. I see you have been taking care of my patient. Thank you for that.” 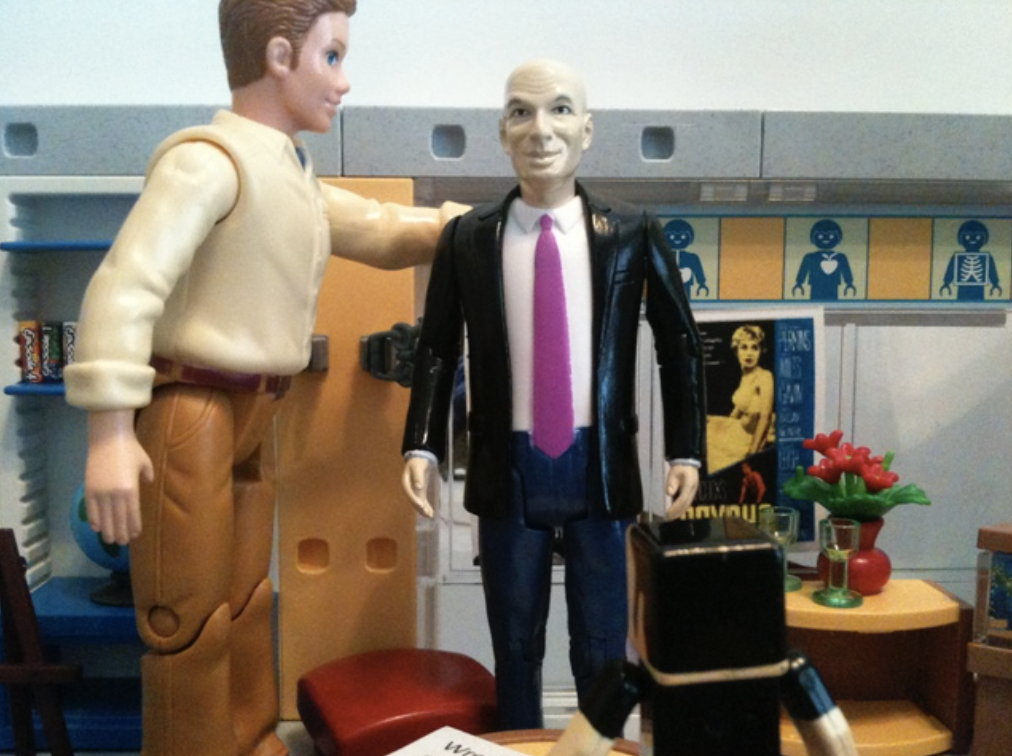 Derek froze. This new guy seemed like he might be the therapist. But then who was the bald guy? 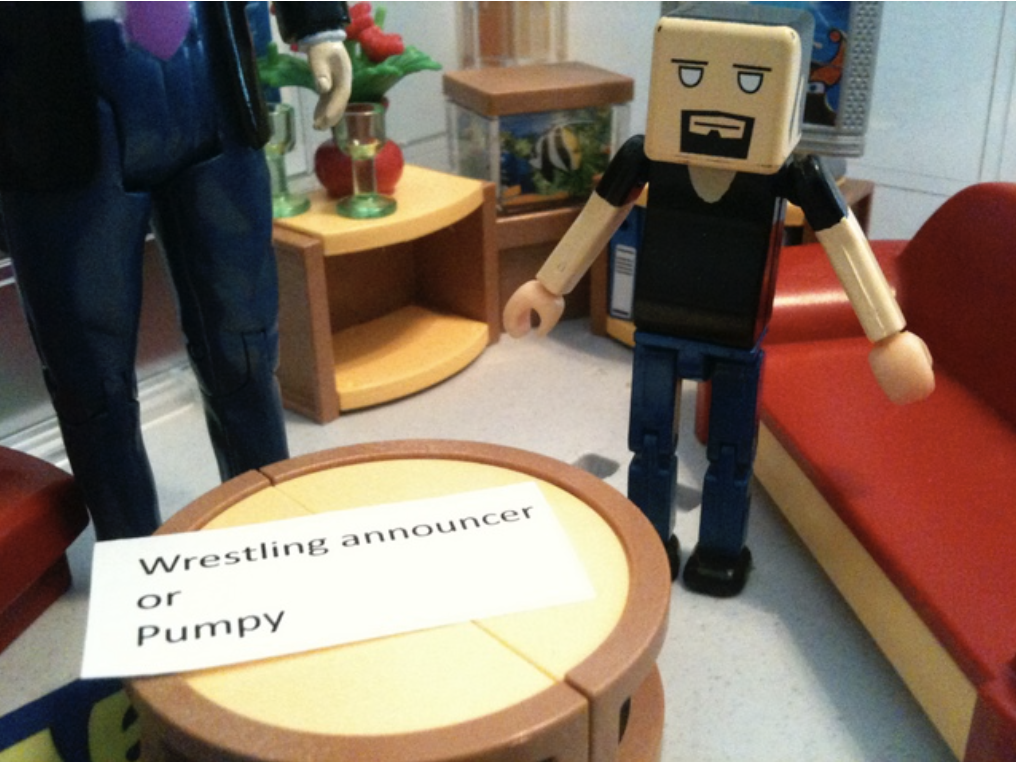 “I see you met my assistant Patrick,” said Dr. Neal. “He’s a bit of an inquisitive chap, I’m afraid.” 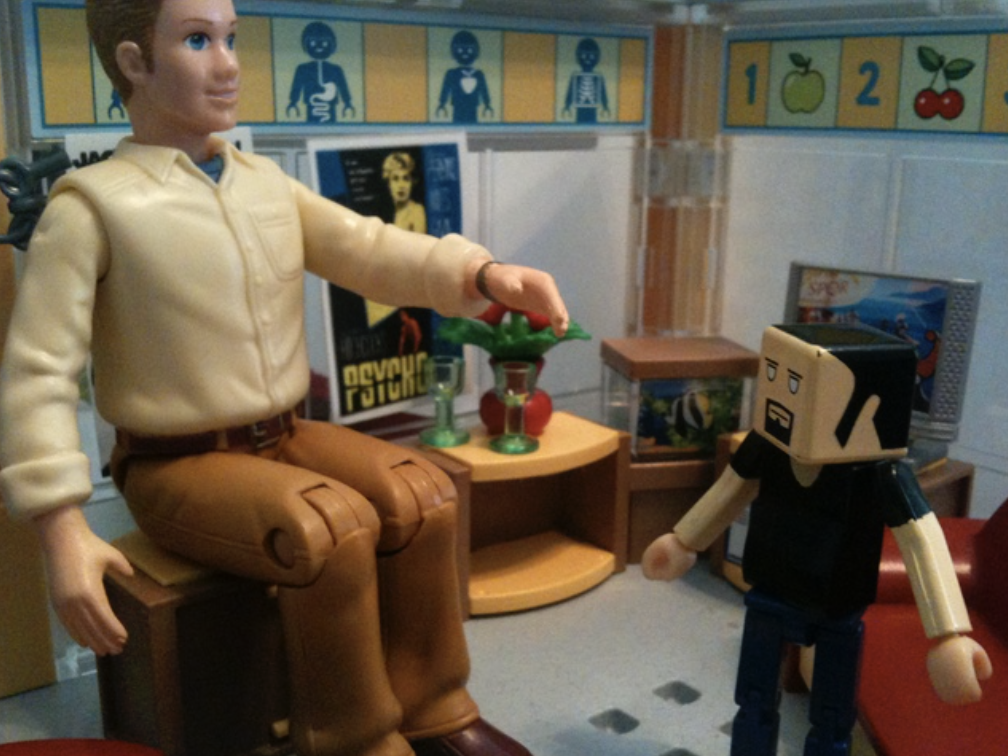 Dr. Neal stood up and bent down to Derek’s level. “Derek,” he said, “I am here to help you with your many, MANY issues. Together we will explore your deepest fears and dreams. I will be asking you very difficult questions. Questions that will seem too personal, but your honesty is essential. While you are here you will talk to me, you will draw pictures, you will journal, you will compose a heartfelt song and poem.” 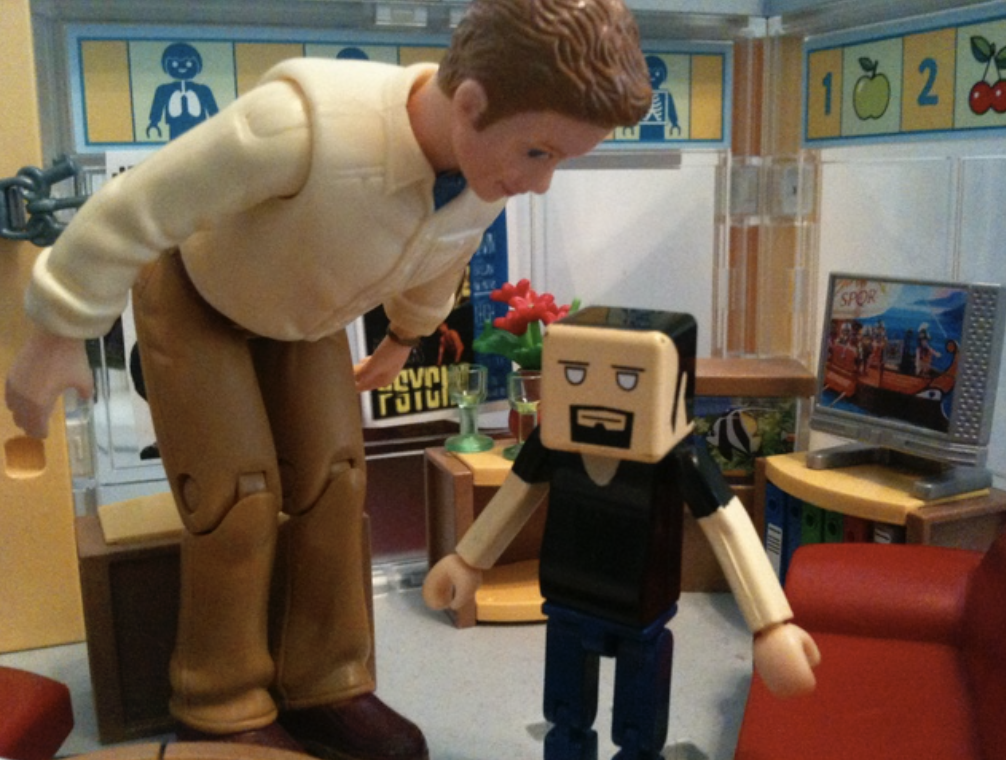 He lightly patted Derek’s back. “You will cry,” he said gently. “You may even sob.” 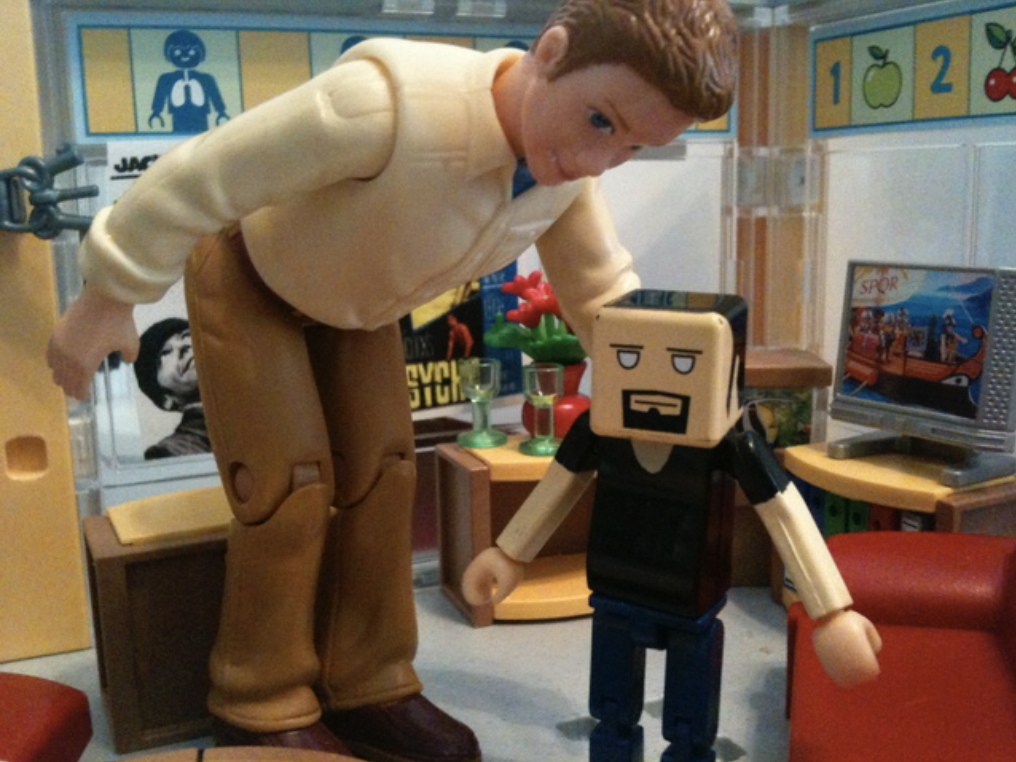 Suddenly the assistant Patrick spoke up.

“OR!” he yelled. “Would you rather hang out with ME in the reception area and continue to ponder important questions?!” 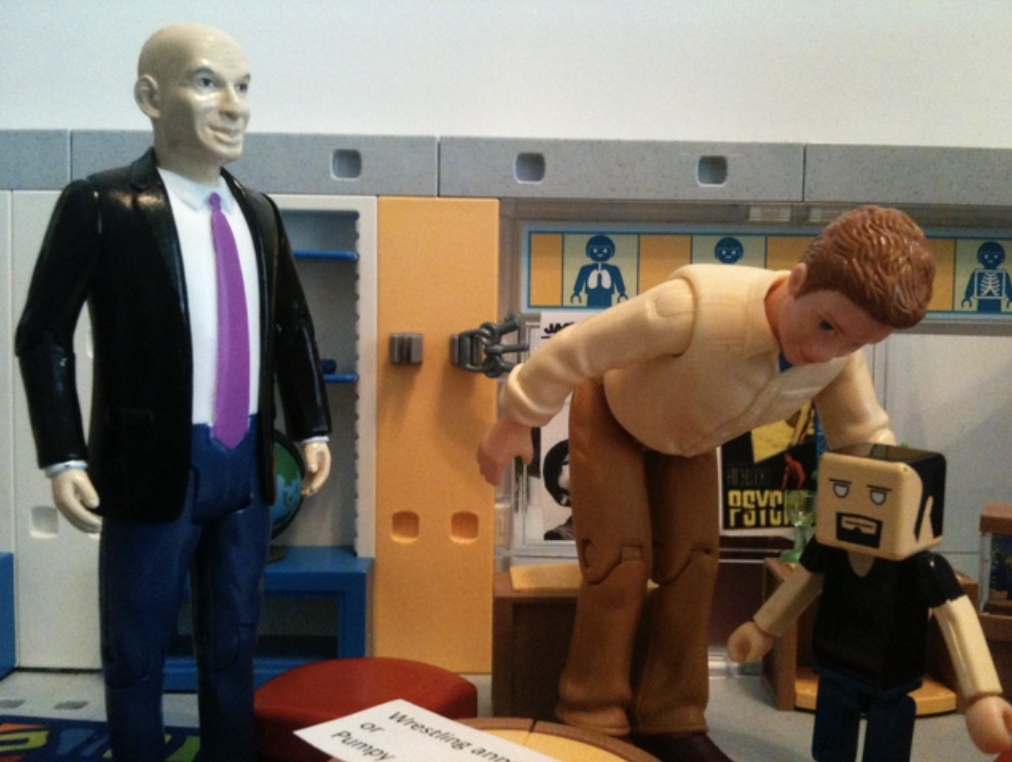 It was the easiest question Derek had been asked all day. 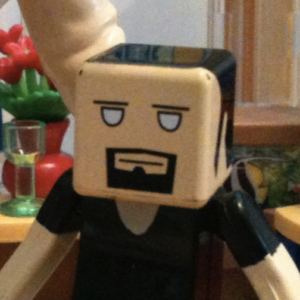 Moments later he was settled into the reception area, mulling over the Gloria Estefan/alcohol question. But Patrick was already on to other pressing matters. “Derek!” he yelled. “Would you rather fight Mike Tyson or talk like him?” 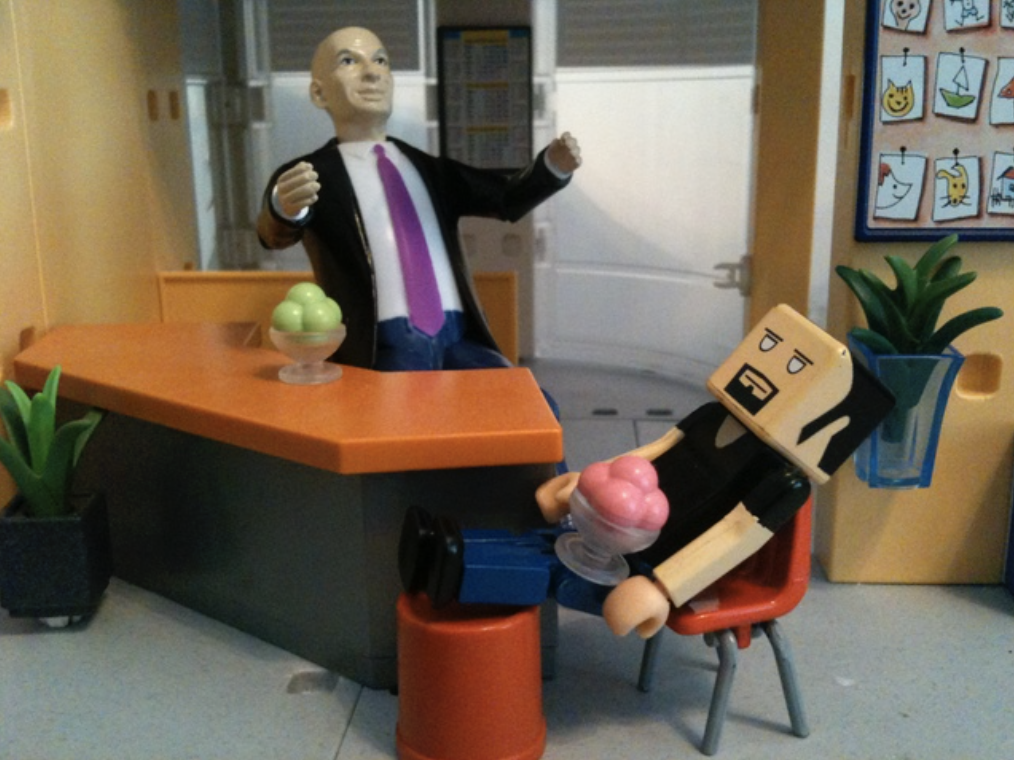 Next: What has Ann been hiding? During her therapy session, her secret is finally revealed — and you won’t guess what it is. 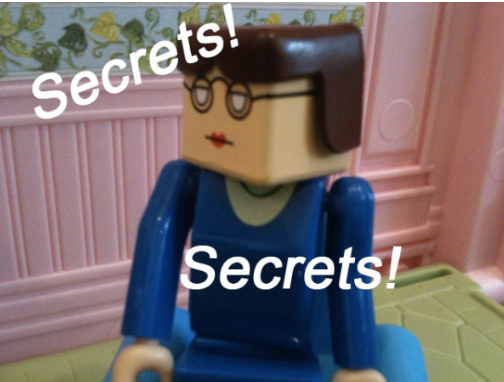