Hedger Corp: The “Smile Campaign” Runs Off the Rails

When we last saw Ted, he was enjoying some downtime in a block of ice. Soon enough, however, his serene world began to melt away… 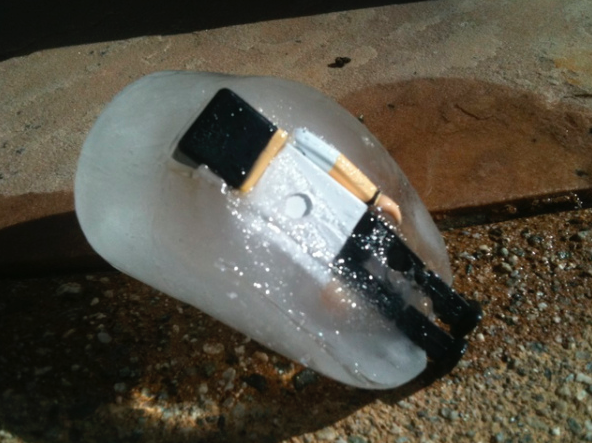 Back in the office, it was business as usual. 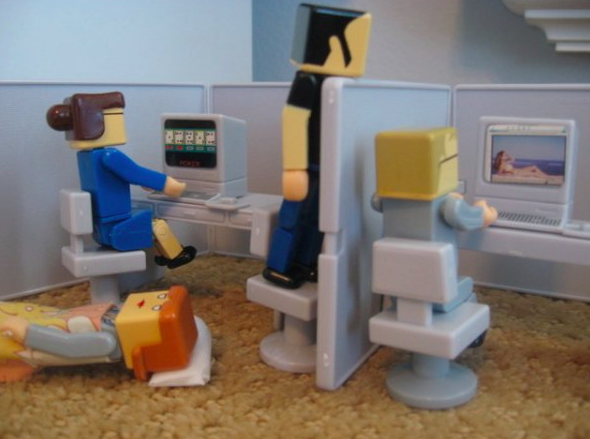 But not for long…

For I had an idea.

It was an idea inspired by Brandon. That guy is always smiling. No matter what happens, no matter how bad things get. One time a monstrous piranha got into his fish tank and ate all his beloved pets in two seconds flat. Did Brandon smile through the pain? Indeed he did. 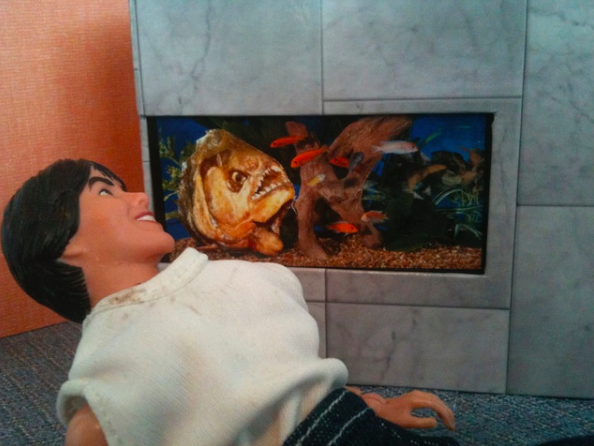 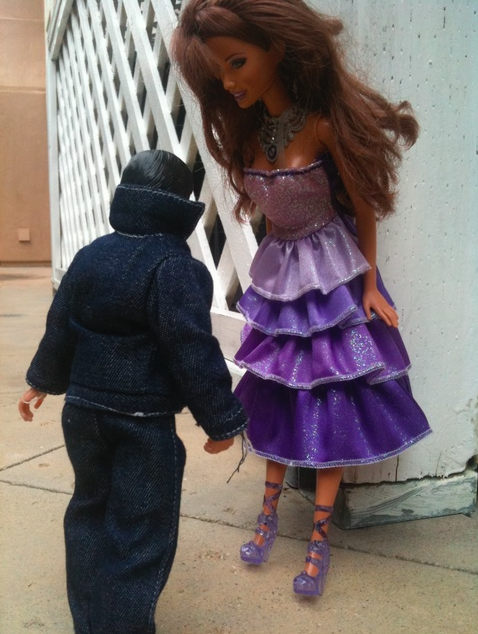 … and announced she was marrying a man who didn’t believe in pants, but did believe in ornate, gold-trimmed shirts. 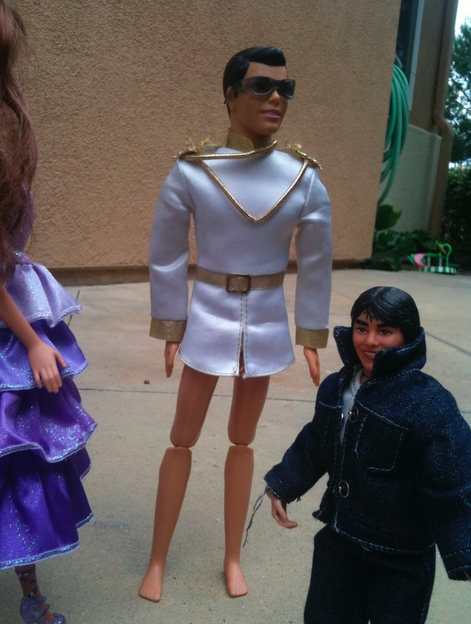 Brandon’s constant smile was inspiring. Somewhat annoying, but also so inspiring. So I asked him to launch a “Smile!” campaign to get the employees fired up. I said, “Brandon, design this however you want, just make it awesome.”

He got to work.

As a first step, he painted a disturbingly large smile and posted it in the breakroom. 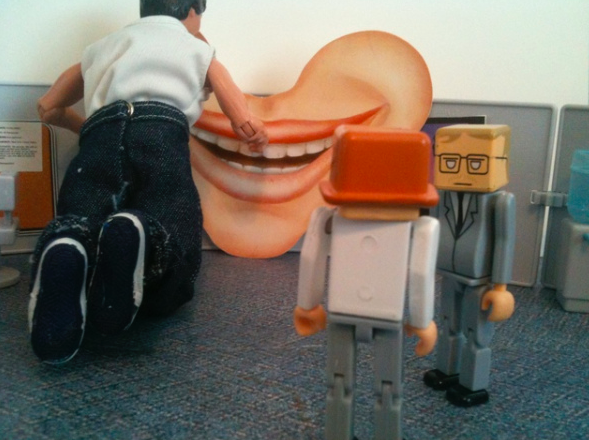 Then he gathered everyone around and demonstrated how to smile. 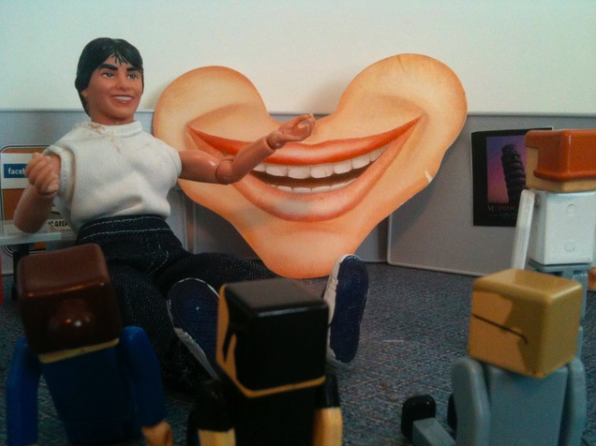 He asked Sue to come up and show everyone her smile. He was hoping to see a big grin, but Sue’s smile was low-key and somewhat wry. 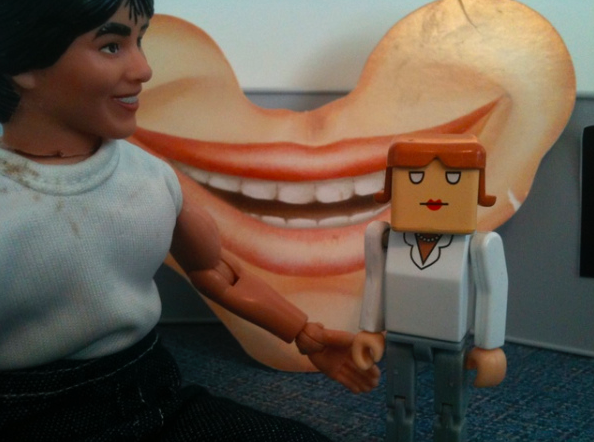 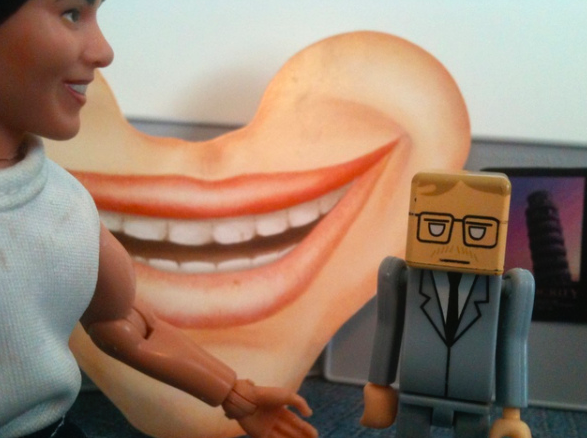 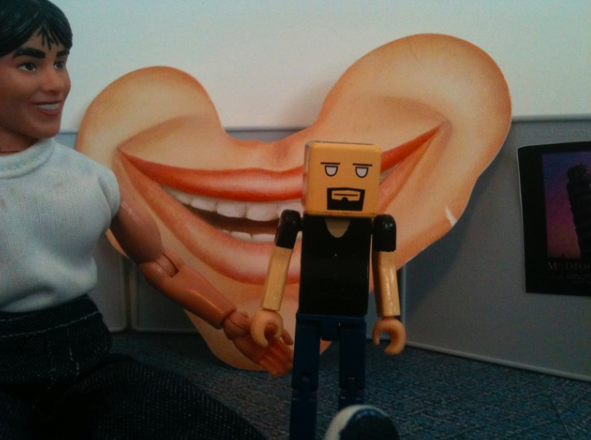 Suddenly, a wet and shivering Ted staggered into the breakroom. The block of ice had finally melted. 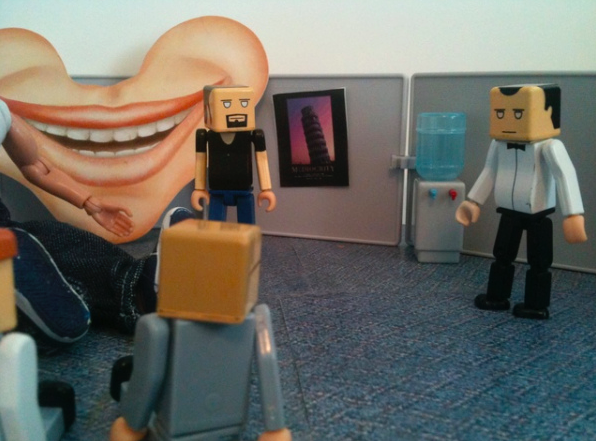 He swayed a bit, then fell flat on his face. 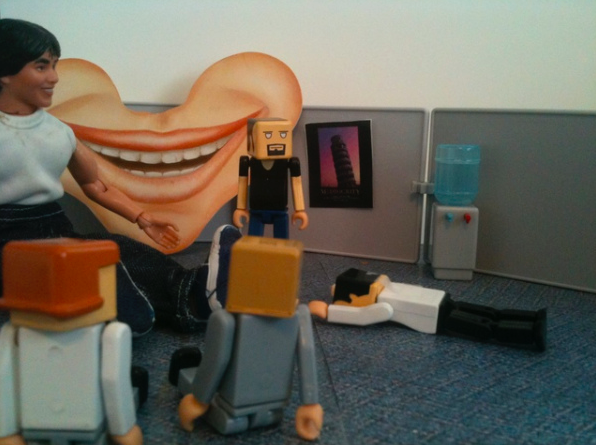 No one moved or said a word.

Then, after they felt like a respectful amount of time had passed, they got back to business. 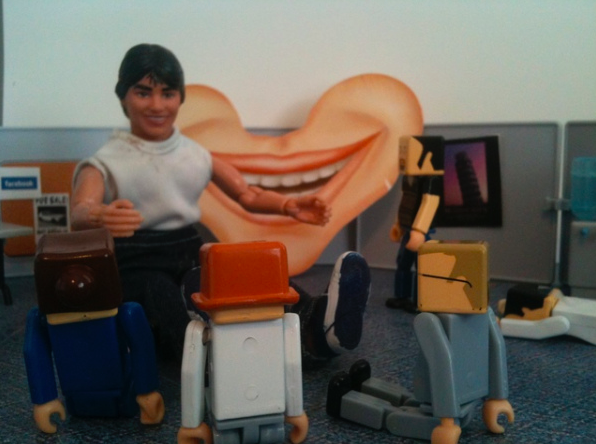 Evidently the huge, freaky smile was just ONE part of the “Smile!” campaign. The other part was a huge, freaky mouth-thing with a lot of teeth. 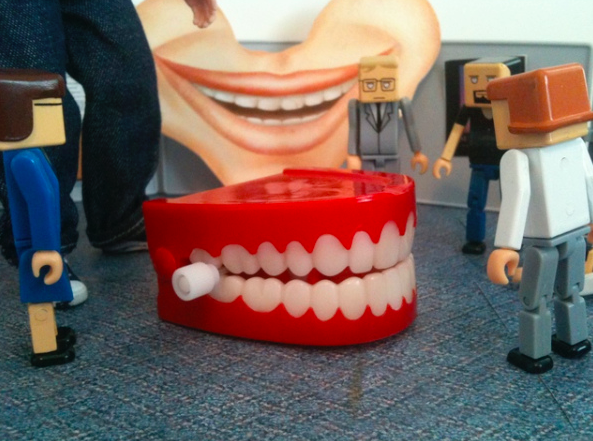 Brandon was trying his best, but his ideas didn’t exactly inspire anyone to smile.

Run away screaming in the opposite direction? Yes. But not smile.

Derek had a lot of trouble relaxing during his afternoon break. 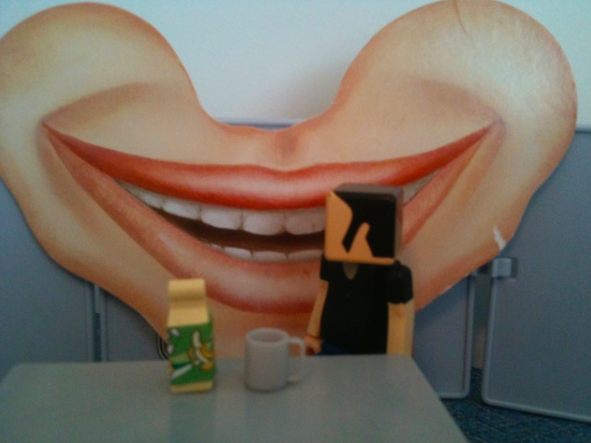 And Bob was dismayed to see that the coffee maker had been placed on top of the big mouth. Come on! 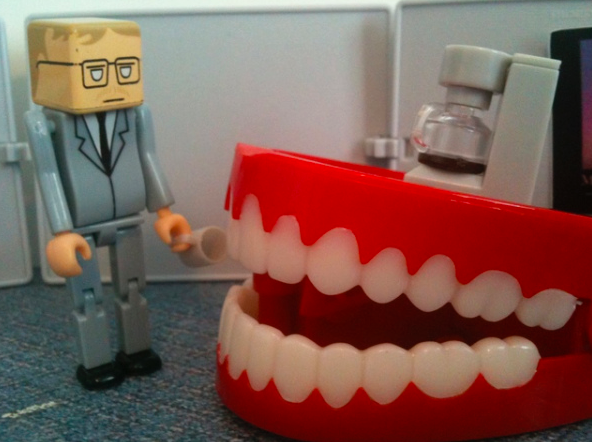 The mouth evidently felt that Bob had had enough coffee. 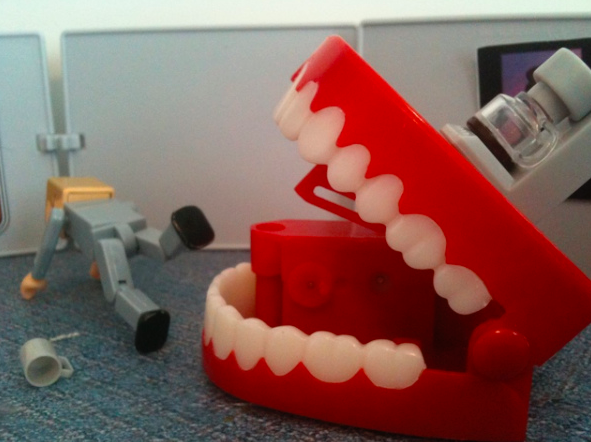 The mouth was turning into a major problem, actually. It chattered its teeth all the time, and tried to bite the employees more than once. But whenever Brandon was around, it was the sweetest, most docile mouth-thing you’ve ever seen. 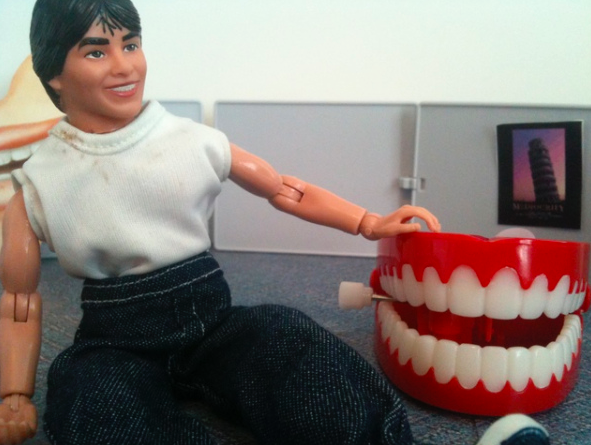 Then every time Brandon left, things spiraled out of control. 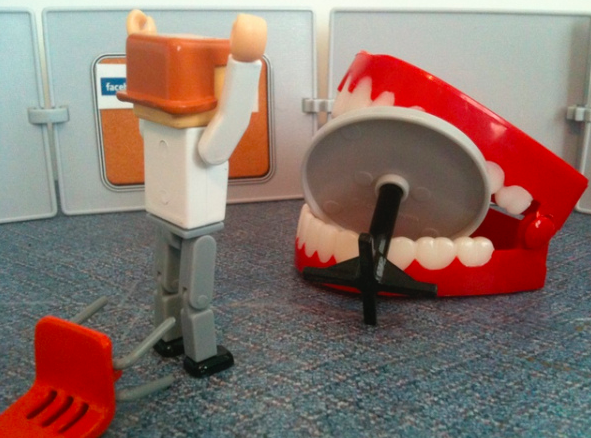 The stress level in the office was extremely high. And it got even higher when the other smile inexplicably became possessed. 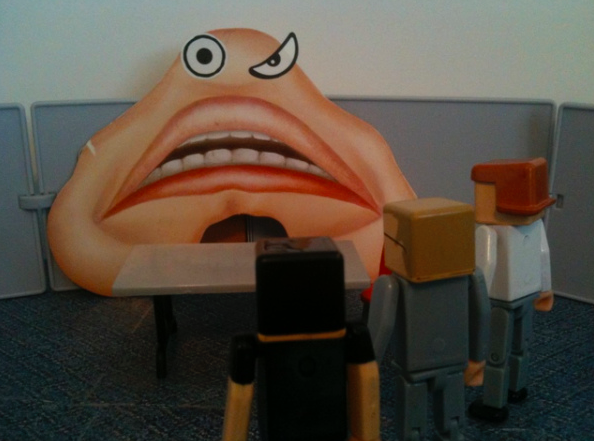 The bigger problem, though, was the toothy mouth. The employees realized that in order to save themselves, they would need to keep feeding it. They looked around for things that would never be missed. Such as the fax machine. 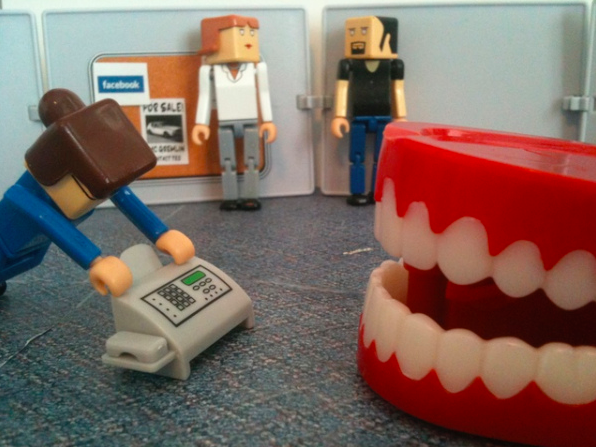 Figuring that there was a better than 50% chance that Ted was dead, they grabbed his computer and fed it to the mouth. 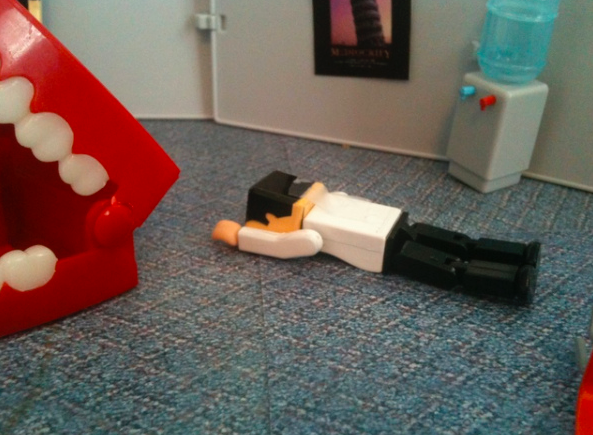 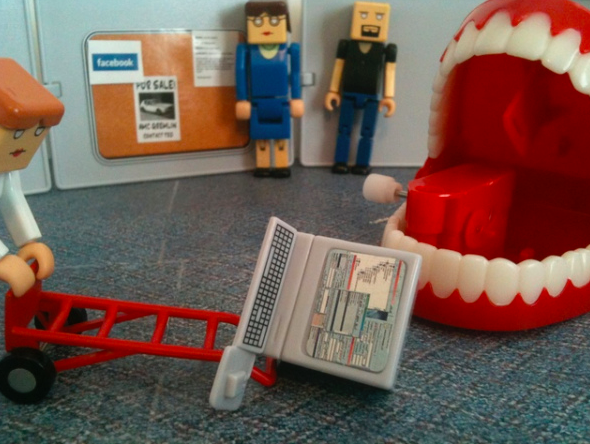 Then, to Derek’s horror, Sue threw an urgent piece of mail into the mouth. It was the BFF key chain. Derek had selected overnight delivery in case things progressed faster than expected with Brandon. The mouth hungrily consumed the package. Derek could not bring himself to watch. 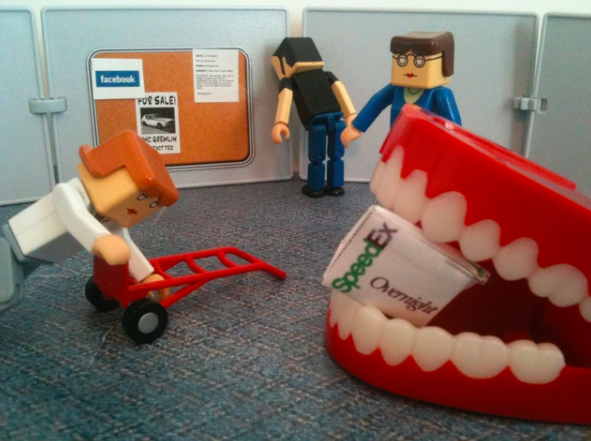 As the day wore on, the stakes got higher.

Desperate to satisfy the mouth, Ann threw in an entire box of donuts. This was unconscionable to Bob. Unconscionable. 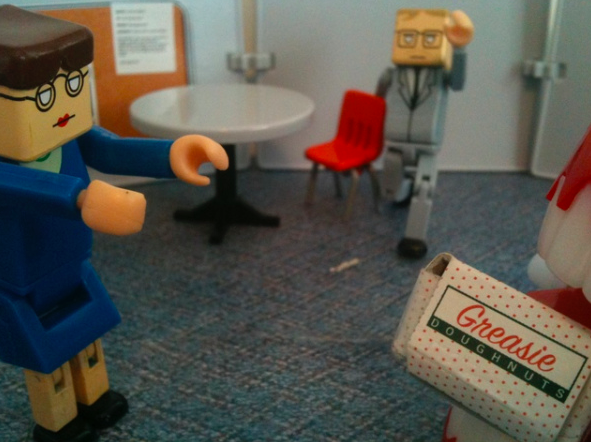 He dove to save the donuts.

The mouth was pleased.

It was at this moment that Ted finally came to. He assessed the situation…

… then started pounding the ground in frustration. This was exactly the sort of mayhem that would NEVER occur in a block of ice. He needed to find his way back to the ice… back to the ice…

The employees knew what they needed to do. They quickly mobilized a rescue mission.

It was successful! The donuts were saved!

Once the adrenaline wore off, it dawned on them that maybe they should try to save Bob too.

But who should save him? They decided to use the “Bubble Gum, Bubble Gum in a Dish” strategy to pick someone.

Derek started the chant. “Bubble gum, bubble gum in a dish. How many pieces do you wish?” he asked Sue. She said 200 pieces, so it took a while to count that out. Finally, Derek got to the finale: “And you are it!”he shouted at Ann.

Ann insisted that it should be “and you are NOT it.” But Derek said, no, the whole point was to figure out who WAS it. Not to figure out who was NOT it. But Ann was adamant. This argument continued on for some time.

Finally, they agreed to start over. “How many pieces do you wish?” Derek asked Ann.

“You are NOT it,” Derek informed Sue four hours later. Suddenly there was a sound behind them. It was Brandon!

The employees surveyed the scene. Bob was gone. Maybe he’d been swallowed? They couldn’t be sure. Either way, Brandon’s beloved “Smile!” campaign was clearly a disaster.

Brandon actually seemed upset. The employees were shocked, and so was I. But on some level I felt a perverse sense of satisfaction. So Brandon wasn’t always Mr. Happy Go Lucky, hmm? He could actually get upset, like a normal person. Well, well, well.

But then he smiled that winning smile. Argh!

As the employees cleaned up the breakroom, they reflected on the horribleness of the “Smile!” campaign. Most of all, they wondered how the big smiling mouth had suddenly turned so bad. Had someone actually gone to the trouble to make big eyes and stick them on the upside-down mouth? But who was maniacal enough to do that?

Next: Important investors visit the office, and a piece of office furniture changes Derek’s life. Meanwhile, Ted finds it hard to adjust to life outside his block of ice.